This weeks admin meeting will include an update on establishing bus stops, general updates, and looking at a new building for Parks & Recreation. Thursday's meeting with Lewis & Clark County will look at shared budget items. Next Monday's formal meeting will include components of the Westside annexation and infrastructure proposal.

Please let me know if you have any questions! 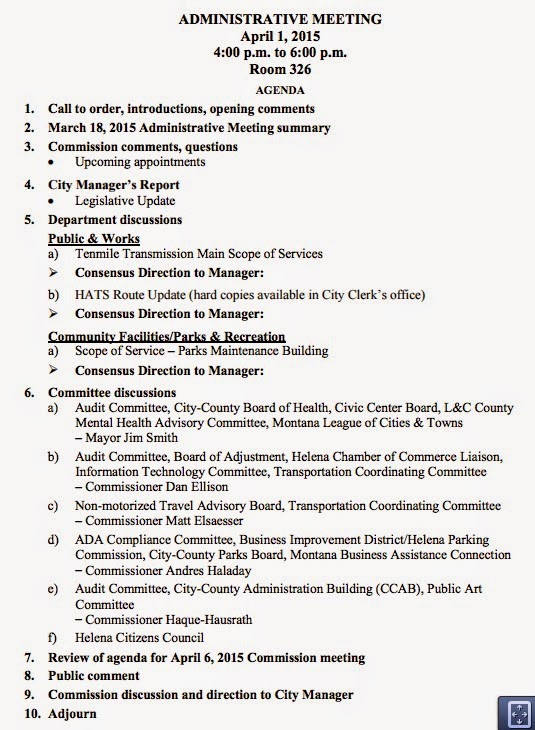 Shared budget items by the City and County such as HATS, Benton Avenue Cemetery, City-County Building, Historic Preservation, and other items with shared fiduciary duties by the City of Helena and Lewis & Clark County. 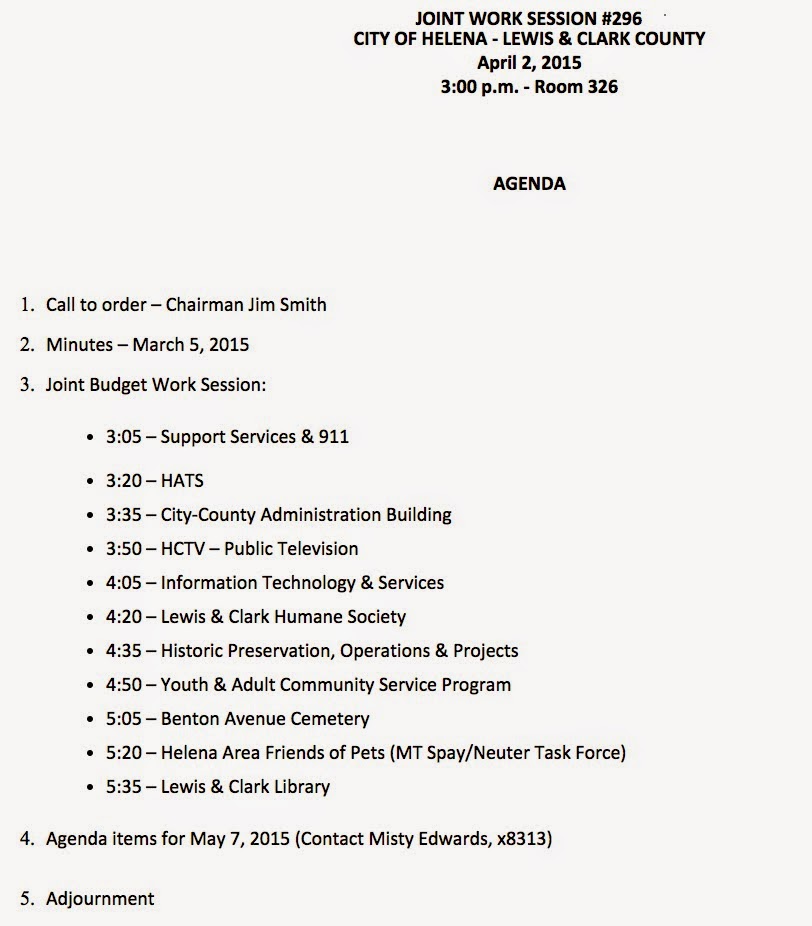 To be posted soon at HelenaMT.gov, will include resolution of annexation for Westside project. 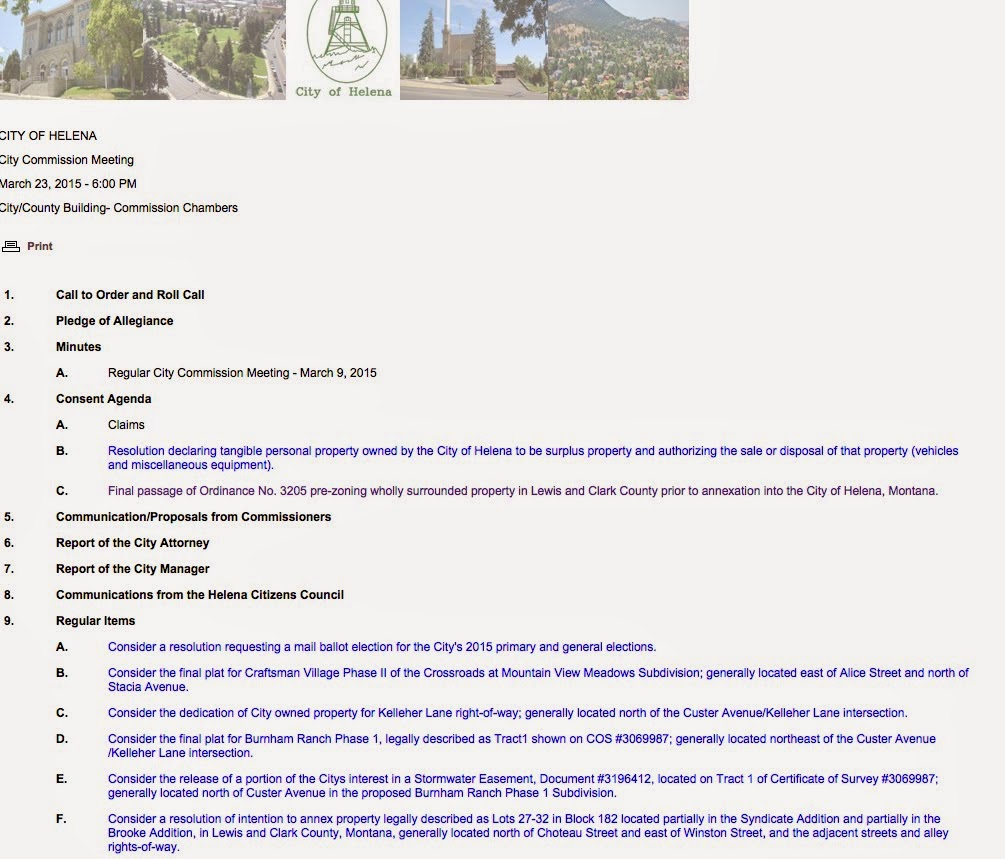 Many important items before the Helena City Commission next week! All meeting open to the public with opportunities for public comment, please join!!

The City of Helena Commission has several meetings next week. All meetings will be held in room 326 of the City-County Building at 316 N Park from 4p.m.-6p.m. (Recent Meeting Agenda's here):

[Note: I try to post formal agendas and meeting materials as they become available. Call or text me at 4 31 zero-eight-one-five with further questions.] 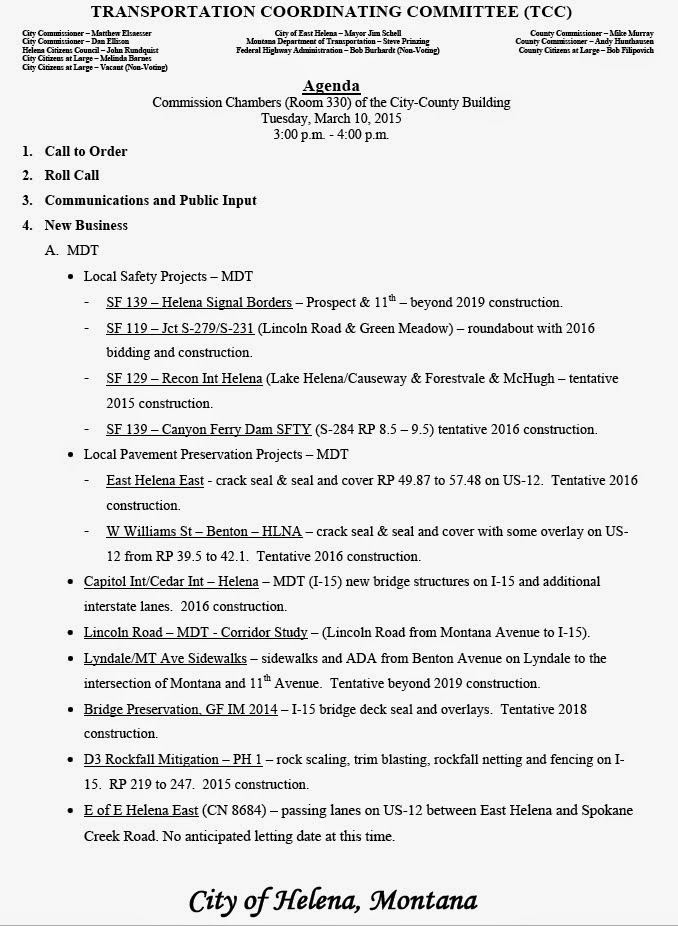 Please fill out this form if you'd like to receive my email updates.

[from City of Helena Online]

Public meeting scheduled for the

A Public Meeting will be held to present the Centennial Trail West project, a Community Transportation Enhancement Program (CTEP) project, and the Country Club Intersection improvements. The project goal is to provide a shared use path along Joslyn Street with access to the Spring Meadow Lake State Park and improve the Joslyn Street and Country Club Avenue intersection to accommodate the new path.

The intent of the meeting is to present and discuss the Centennial Trail West and Country Club Intersection improvement options selected by the Helena City Commission.

Community participation is a very important part of the process, and the public is encouraged to attend the meeting and provide comments. Written comments may be submitted by mail to Cody Salo, DOWL, 1300 Cedar Street, Helena, MT 59601; or by email to csalo(at)dowl.com.
Please submit comments by April 10, 2015.

DOWL will attempt to provide accommodations for any known disability that may interfere with a person's participation in this activity. To request accommodations please call Cody Salo at (406) 442-0370.

See also "Centennial Trail West to be Built this Summer!"

"The City of Helena has the following board openings.." Apply by 4pm Thursday, March 12th!

The City of Helena has the following board openings:

The ADA Compliance Committee will act as an advisory committee to assist in determination of reasonable accommodations.  The Committee may review requests for reconsideration of complaints forwarded by the ADA Coordinator, may make determinations as to the validity of complaints, and my provide descriptions of the resolution of those grievances that have been appealed.  The Committee may recommend priorities for making structural changes to public facilities, offer suggestions on how to achieve program accessibility, and review and make recommendations on employment practices and accommodations for compliance.

Non Motorized Travel Advisory Council (NMTAC)
One resident of the City of Helena to serve on NMTAC.  The term would begin on April 1, 2015 and expire March 31, 2018.  Interested persons should have knowledge, expertise and interest in promoting non-motorized transportation.
The general purpose of the council is to advise and make recommendations the City Commission regarding matters related to non-motorized travel and traffic calming, including the impact Commission actions may have upon bicycling, walking, and traffic calming.

The Public Art Committee assists in promoting the concept of community awareness of and involvement in providing public art in Helena.

This commission shall perform zoning functions for the city and shall be the sole Zoning Commission for the City of Helena.

This post from last year still provides a good overview of the opportunity Helena has to increase recycling, expand diversion opportunities, and address electronic and household hazardous waste. This can and should be done by better utilizing the tax payers funding of our communities' public collection utility, public transfer station, and public landfill.

The City Commission will have a work session focused on recycling sometime soon, hopefully the week of March 16th. 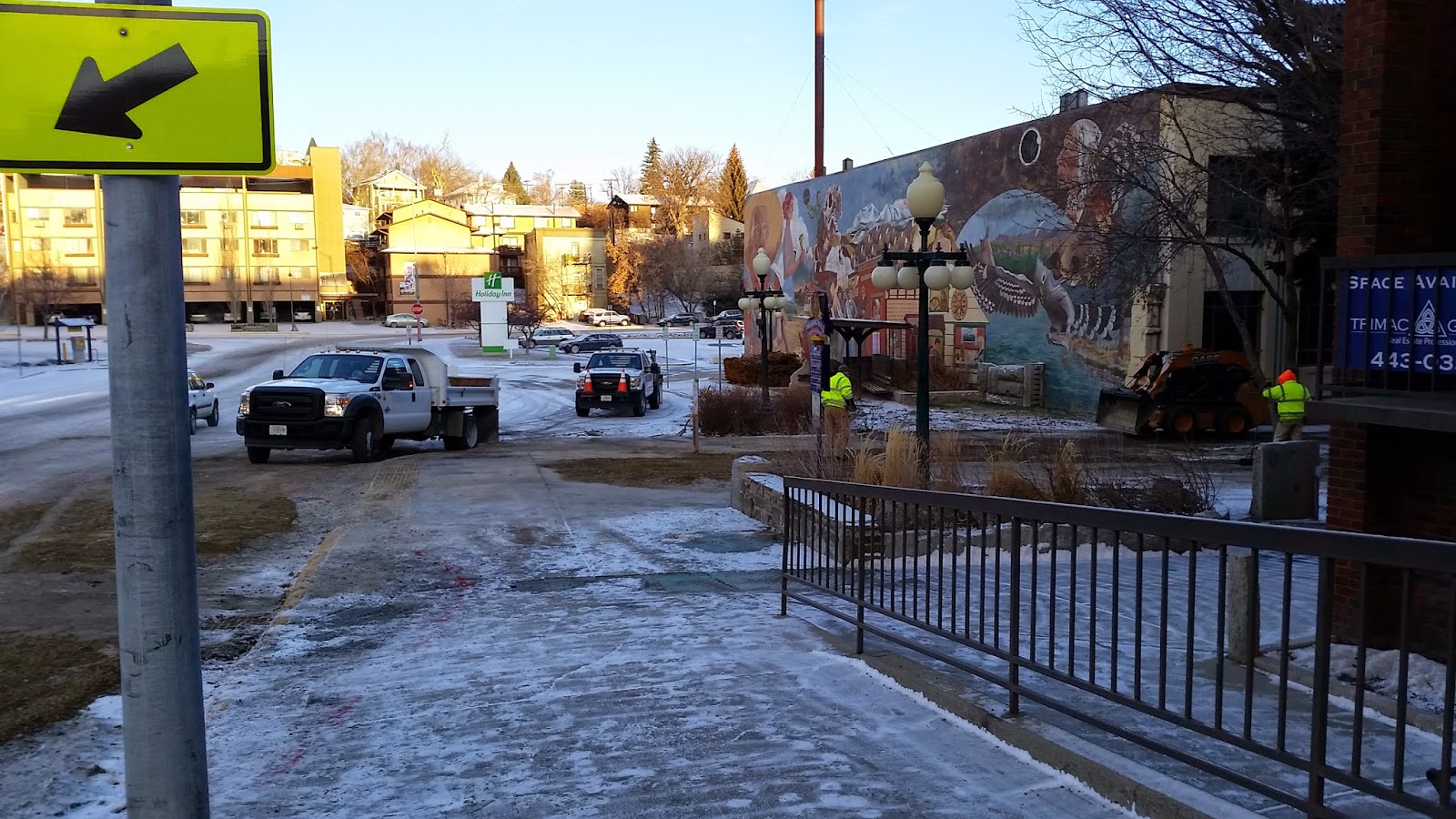 This afternoon, a water main broke near the crossing of Broadway and Helena's Walking Mall. Since that time, Helena's Water Utility has closed valves to stop the flow of water and begun earthwork to isolate and repair the leak. Public Works also put sand and salt on the Walking Mall to address the ice that had formed with dropping temperatures.  Great job! 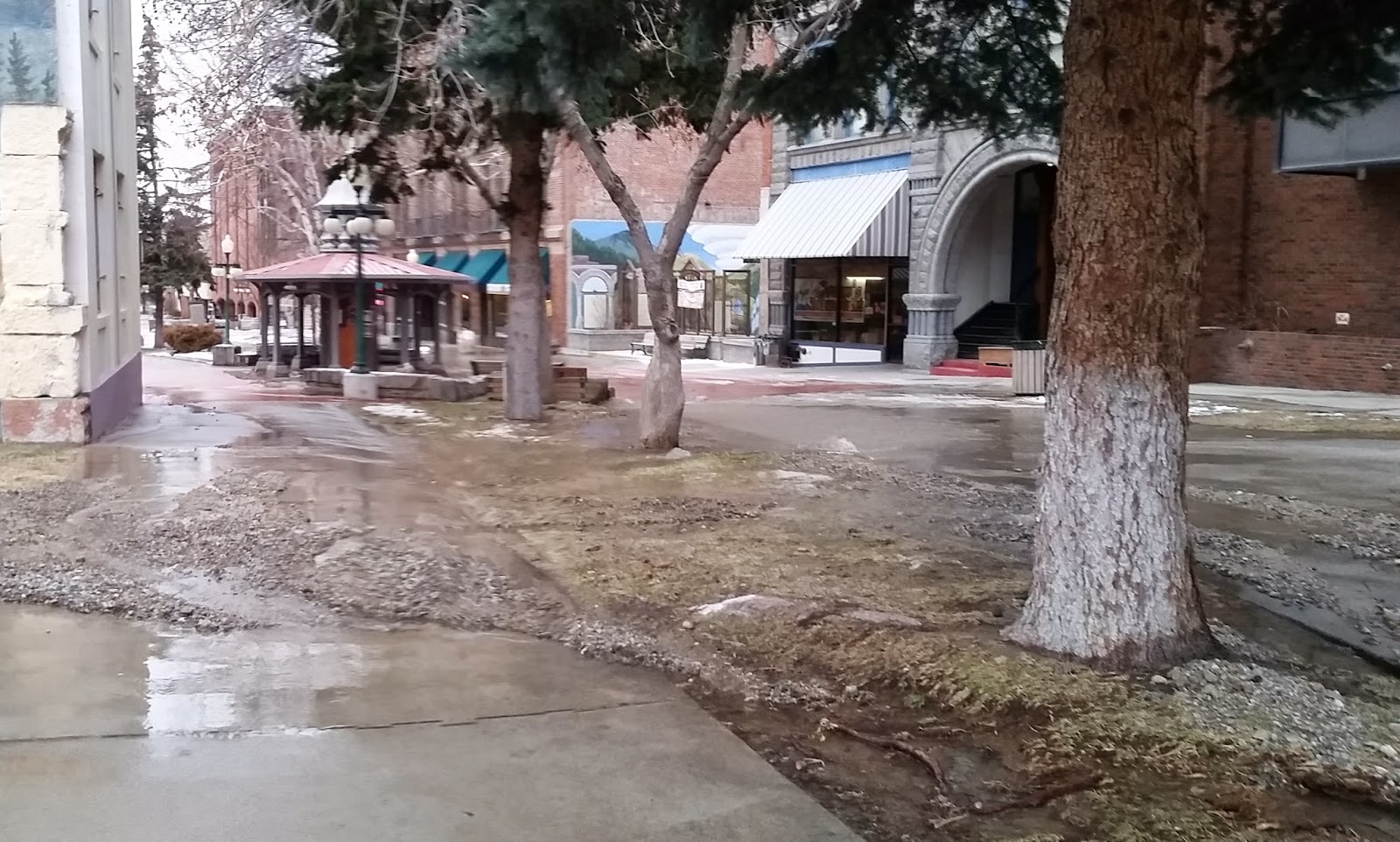 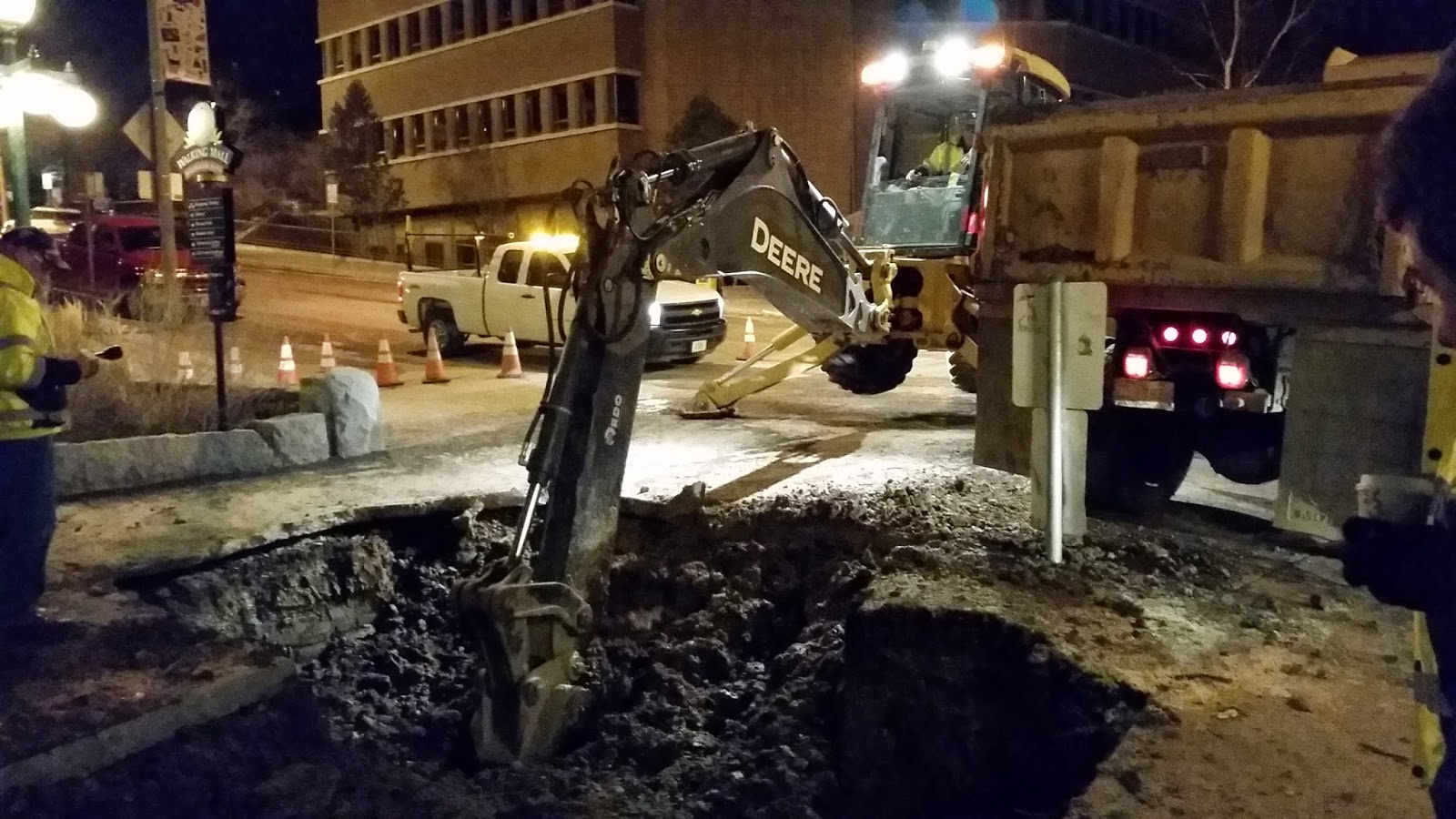 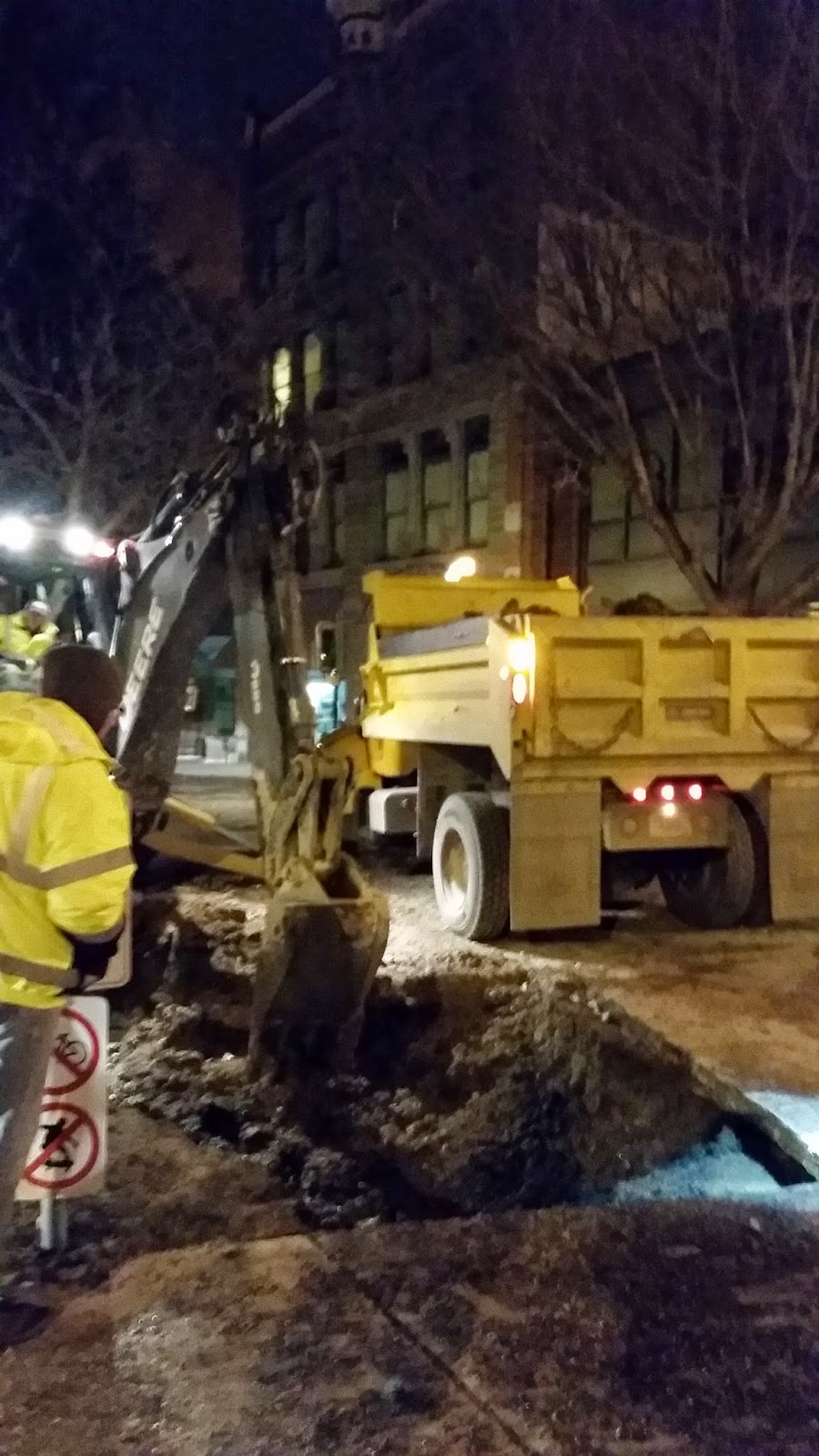 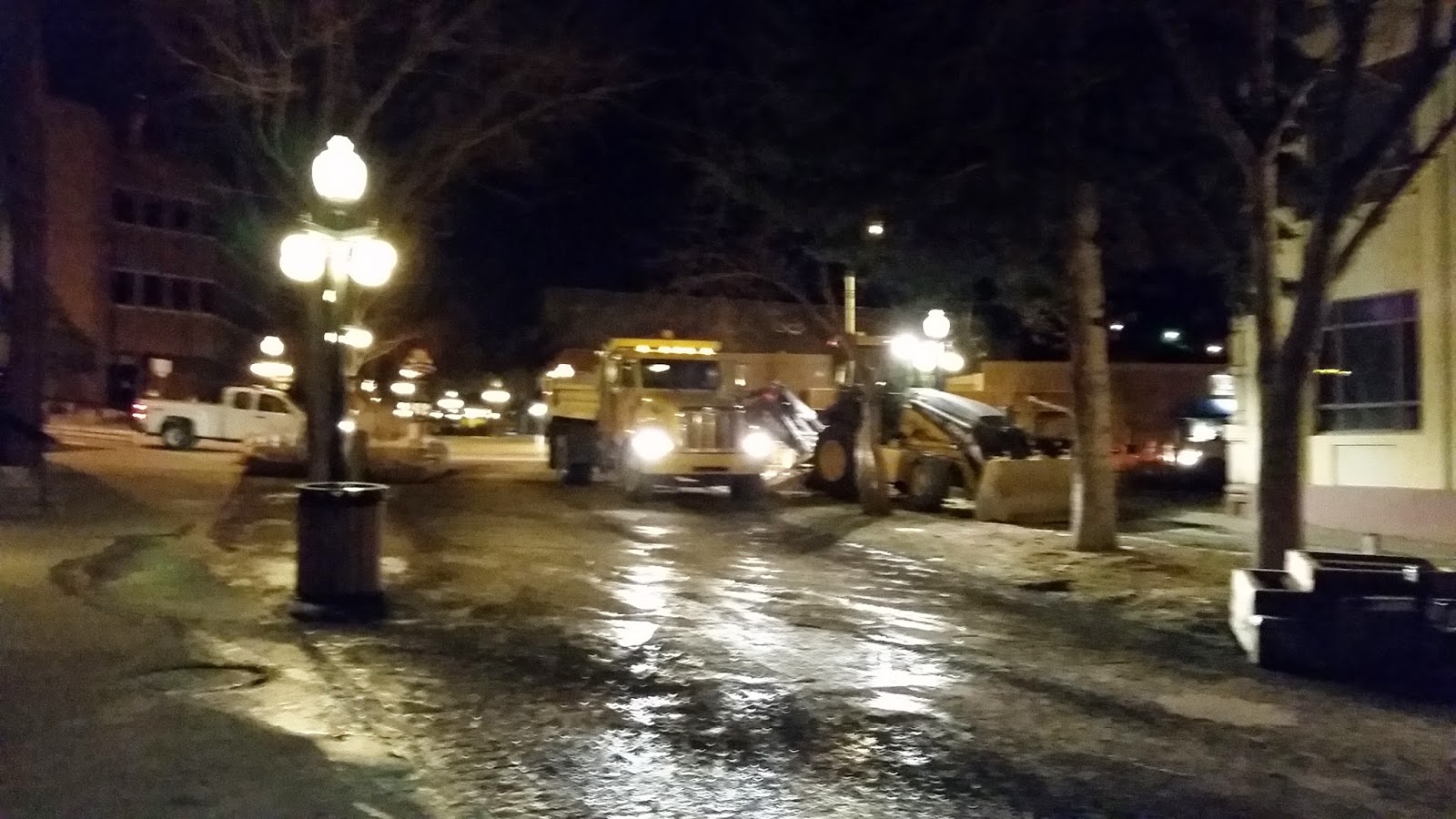