This next year, during Helena's 150th, a million dollar plus City water project will take place around Front Street near the Great Northern, the recently opened distillery, and the pedestrian underpass connecting downtown to Centennial Park and the Centennial Trail Network. The recent Greening America's Capitals project for Helena outlines how infrastructure improvements can include improved walkability and bringing back the historic creek-now piped under the streets-to the surface: 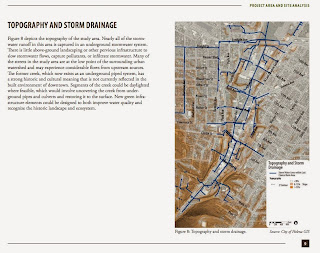 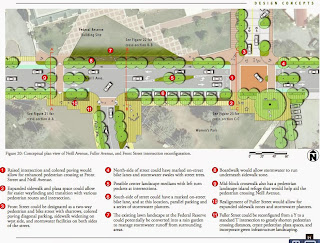 
An informative post on Last Chance Stream from "Montana Moments:"

"Some Helenans dispute the fact that Last Chance Stream, or Creek, once flowed through what is now the downtown. But water was the one essential ingredient needed for placer mining, and we know that the discovery site was where the parking lot for the Colwell Building is today. Water had to be present in that immediate area. Further, the first historic Sanborn Maps of Helena, drawn in 1884, clearly show the water source, although by this time it has been diverted underground into a wooden flume."

"The discovery men became known as the Four Georgians for reasons the community soon forgot. Historians speculate that since one of the miners was from Georgia, where gold was mined before discoveries in the West, they were probably practicing a Georgian method of placer mining.
In the great frenzy to get at the precious metal, miners soon stripped the landscape of everything green, churned up the soil, and built their buildings along the claims that followed Last Chance Stream through the gulch. In October, residents gathered to properly name the mining camp known as Last Chance."
Posted by Matt E at 11:47 AM