Snowplow Shutdown. Why is snow removal such a problem in Helena?

Thank you, Mayor Collins, for acknowledging that snow management needs to be better in the City of Helena. Thank you to the commissioners seconding those comments as reported in today's Helena Independent Record.

Commissioner Noonan's comments, in particular, are indicative of the challenge the mostly new commission faces in working to address this issue:

"I feel frustrated," Noonan wrote, "but maybe we can find a different approach, as well as make some inroads into convincing staff we need an approach specific to this winter's specific circumstance."

Commissioner Noonan is spot on that a specific approach is needed that depends on the actual conditions facing the city's public works department. And too, his hint that there is a challenge to getting upper city management to acknowledge the need for such as approach. Getting such acknowledgment, genuinely reviewing the current situation, and advancing management improvement will likely be very difficult for the part-time commission.

Today's response by the City Manager and Public Works Director echo those following "Carmageddon" in 2012 when more than a hundred accidents occurred including a police vehicle being hit six times trying to warn drivers on their way home as reported here. On that day, all city drivers for the city's trucks had already gone home for the day when the roads iced up later in the afternoon.

A self-review of snow plowing in 2014 by the City Manager, Public Works Director, and some other executive city staff concluded that Helena's bizarre "complaint driven" system could not be improved upon. Some of the correspondence around that review follows here: 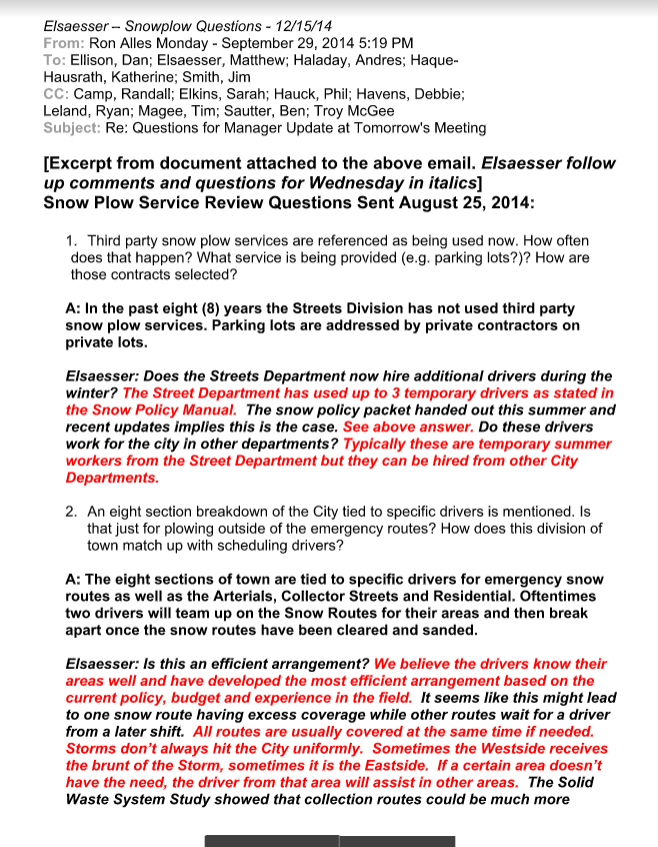 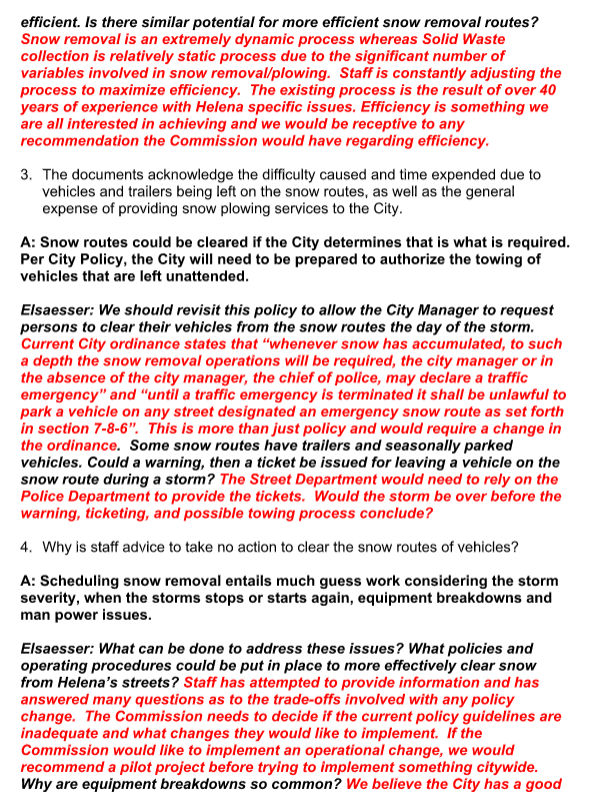 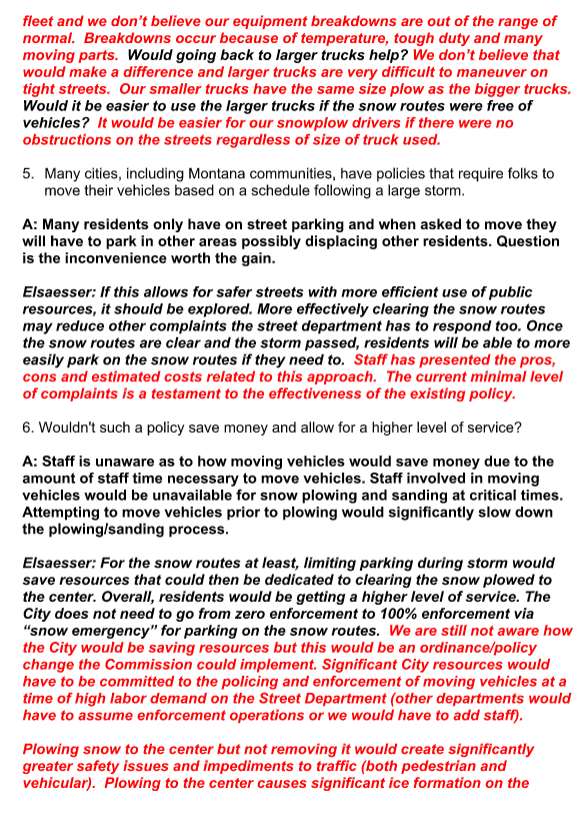 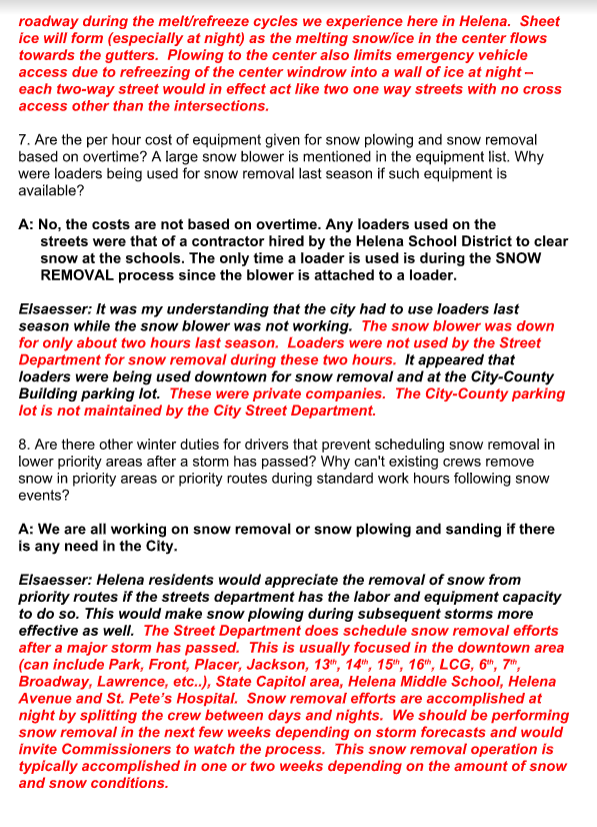 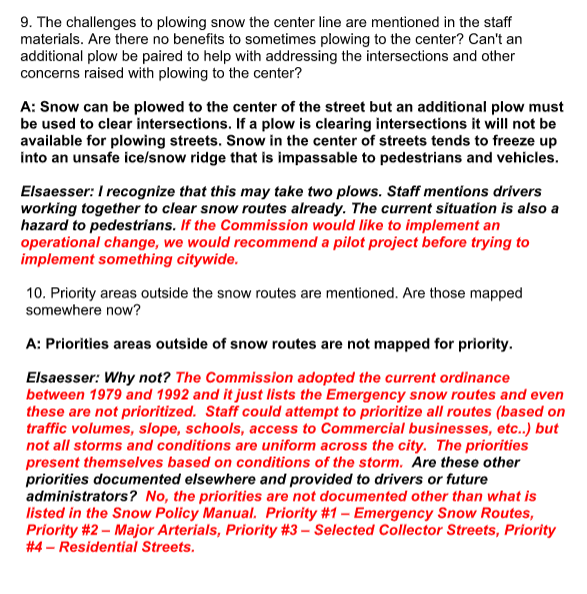 To truly improve snow plowing policy in Helena, the Commission will need to find a way to independently review the current operation. It is not fair for their time, nor the public they represent to have to be spent debating various actions such using de-icer that may improve things in some areas (a plowed intersection), or not work in another (most streets where we'd just get slush that would have an impact to some vehicles). Nor to pretend that the current "policy" works when much of town is covered in dangerous tundra packed down by cars for days or longer making a mockery of sidewalk enforcement, endangering anyone walking or driving on the streets, costing other departments, and damaging the clear roads with heavy garbage trucks that will need chains for weeks or more longer than necessary. Nor would it be fair to expect executive staff to review their own work.

Tracking the deployment, routes, and operations of the trucks would be a start. Doing so is affordable and common, even for many small businesses already. It would provide a clear picture of how many hours the trucks are deployed and might snow the real cost of not plowing initially. It would create a record that could be reviewed by an expert and hopefully set the groundwork for showing when and where city street trucks are plowing, sanding, and sweeping to allow residents to move their vehicles to help improve results.

Increasing transparency at the city overall will take longer but is long overdue. While it will be resisted by some management at the city, it will help the public follow and contribute to a better run city, allow commissioners to be more effective, and-hopefully-lead to more acceptance by some executive staff of the commission's role to bring forth ideas to improve services in our community.

There are always going to be challenges to snow removal based on weather, varied conditions across town, and resource constraints. However, this service, in particular, seems to have declined despite a "restructuring" of Public Works to include more admin, market-based pay increases, and utility rate increases well above inflation.  Further, we seemingly have a workforce of competent drivers on standby that can even be increased if needed and such need is acknowledged. Snow management in our winter climate is a good place find a positive approach to find a way to do things better. Something management, our commission, and our community can be proud of.